Davenport College was named for the Reverend John Davenport (1597 - 1670), a descendant of the Davenports of Cheshire, England, and one of the founders of the New Haven Colony. He was among the first to propose the establishment of a college in this colony. Completed in 1933, the buildings were designedby James Gamble Rogers. Edward S. Harkness gave the funds for their construction.

The main gate of Davenport leads from York Street into the Upper Court, at the left of which are the Dining Hall and kitchen and the Common Room. Ahead is the colonnade or cross-piece, and at the right is the main body of the undergraduate quarters.

The Dining Hall is two stories high, with a paneled interior. Centers of interest are the gallery, the two great fireplaces, and the beautifully-executed wood carving. In the middle of the room hangs an original Waterford chandelier (ca. 1790), the gift of Charles Dudley Armstrong. Adjoining the Dining Hall is the Common Room, over which is the Spitzer library.

The colonnade, parallel to the York and Park Street sides of Davenport, contains several floors of student rooms, a seminar room and the Davenport College Office. It forms a half-separation between the upper court and the smaller lower court. The latter includes a garden behind the Master’s House, which faces Park Street.

On the north side of the Upper Court is a large wing, simple in outline and so designed as to avoid the difficulties inherent in the placing of so large a building in the midst of smaller ones. It is set on a raised terrace, which cuts down its apparent height, and is reached by a curved double flight of stairs with iron balustrades. At the base of the terrace are two small buildings, resembling cottages, which contain studies for some of the non-resident Fellows and Senior student housing.

The inscription at the east end of the north terrace is the epitaph with which Cotton Mather, in his “Magnalia Christi Americana” (1702), closed the account of thelife of John Davenport. It has been freely translated:

“Up to heaven as he ort

All mourned sadly when he died.”

The east wing of Davenport is modern Gothic in style on the outside, to harmonize with Branford and Saybrook across York Street. Over the gateway, at the point of the arch, is the figure of a boar in a net, a device used as a crest by Elihu Yale.

Arms: Silver, a chevron and three cross crosslets, fitchy sable. This is an adaptation of the Davenport family arms. AS borne by members of the family, the arms included a crest, described as “a felon’s head, couped at the neck proper, haltered or,” which is said to have come from the 13th-century hat-badge of the men of Vivian d Davenport, Grand Sargeant of the forests of Leek and Maccelesfield, Chester. Its purpose was to strike terror into the hearts of marauding bandits. The fee for the capture of a master robber was 2 shillings and a salmon, and for his companions 12 pence each.The arms appear high over the York Street gate. To the left are the arms and motto of Coventry in Warwickshire, where John Davenport was born; to the right are the arms and motto of New Haven. The two animals flanking the high gable over the main gate (and the pair on the courtyard side) represent fabulous heraldic beasts called yales.

Bookplate: The bookplate, designed by Theodore Sizer, utilizes a strapwork decoration characteristic of the 17th-century.

China and Silverware: The family arms appear in black and red on the china and are graved on the silverware. Collaborating on the designs were Fredrick W. Dunn. Carl A. Lohmann, Mr. Sizer, and Mr. Tuttle.

Blazer and Tie: The blazer is black with white piping and with the arms on the pocket. The tie is black with narrow stripes of red and silver.

In the spring of 1970, protesters from around the country converged on New Haven to decry the arrest of Black Panther leader Bobby Seale.  A rally on the Green had been planned for May Day and Yale got down to the work of preparing for the crowds to come. Davenport was one of the key convening sites, serving as a child care center for protesters’ children while they gathered to make their voices heard. The Davenport child care operation lives on in the Calvin Hill Preschool not far from the Yale campus.  The entrance to Davenport during this time was as seen below. 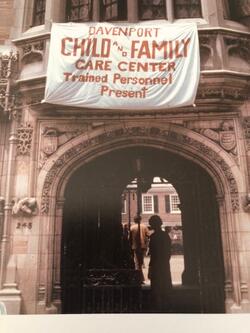 Davenport benefits from the proceeds of two funds:

(1) The Allison V. Armour Fund, established in 1941 by Mr. Armour’s bequest, which is designed to provide books, works of art, or furnishings for the College or supplies for the Fellows’ Room.

(2) The Charles D. Dickey Fund, established in 1958 by classmates, business associates, and friends of Mr. Dickey and given by him to the College, “to add to the enrichment of the life of the students or the Fellows, such as bringing to the College interesting visitors and speakers, the acquisition of books, periodicals, and magazines, or providing emergency grants to Fellows or students.”

Through the Lustman Fellowship, established in honor of the former Master (now called Head of College), Davenport enjoys visits from distinguished people in the arts, sciences and public affairs. Former Lustman Fellows include Lillian Hellman, Arthur Miller and George Kistiakowsky.

At Commencement, the College awards the following prizes:

(1) The Emerson Tuttle Cup, an engraved silver beaker, to the Senior who, in the opinion of the Head of College and Fellows, is most distinguished for scholarly attainments. With the cup is given a book of prints by Mr. Tuttle, one of America’s great etchers and graphic artists.

(2) The Daniel Merriman Prize goes to a Senior for outstanding participation and leadership.

(3) The Senior L. Lustman Memorial Prize is awarded to a student who has contributed to the artistic and cultural aspects of the life for the College, and who submits the best proposal for the use of this prize in support of a project in those areas.

(4) The B. E. Bensinger III Prize goes to the Senior who, in the opinion of the Head of College and Fellows will, by virtue of this or her proposed program in the social, physical or natural sciences, make best use of the additional support.

(5) The Davenport Fellowship Community Service Award recognizes a member of the Davenport College senior class who has distinguished themself during their time in the College through service to people in need or at risk in the New Haven community, in the United States, or around the world.